We say…..A very popular wine with loads of finesse!  Perfect with food or without.

Pazo Señorans Albariño from the Rias Baixas area of Spain is a real gem!  This producer is widely recognised as one of Spain’s finest wine producers. The wine has frequently won “Best White Wine” trophy at the Wines from Spain awards and regularly receives the highest score from TWA of all Albariños.  In Spain, Albariño vines account for more than 90 percent of the grapes planted in the Rias Baixas area. The wine is generally sold as young wine in the year following harvest but, and this is the important thing about Señorans, it has the ability to age and is probably at its best 18-36 months after harvest.  Pazo Señorans Albariño has dry, citrus flavours and a mineral-driven finish.

Frighteningly fashionable, Pazo de Señorans is now seen as the very best Galician winery.  Anna, the winemaker, is fastidious in her approach, which could not be more pared back or simple.  Having worked with the same growers over many years, it’s the quality of the fruit which is the secret to her success.  The vines are farmed at relatively low altitudes, not too far from the sea, with the soils influenced accordingly by sandy elements.  Vines are trained on a pergola system and there is manual picking of the grapes.  Fruit comes from their own 29 hectare vineyard and also from a further 160 growers with 500 specially selected micro-parcels of land which are all inspected rigorously.  The use of so many growers adds the complexity to the wine that Pazo Señorans are known for.  Alcoholic fermentation is carried out in stainless steel tanks with early bottling at around 4 months on the lees.

The resulting Pazo Señorans Albariño definitely is a wine of great aromatic harmony. Dry, citrus flavours and a mineral-driven finish, which expands and deepens on the tail end, offering a satisfying balance of power and finesse.  Our Magnum bottle of Albariño, which contains the equivalent of 2 standard sized wine bottles, is a cracker and will remind you of happy Spanish holidays!  Definitely one for enjoying yourself but if you treat your friends to this they’ll be very happy!

All our magnums and jeroboams come securely packaged in a beautiful presentation tube and are supplied with a gift tag. The even bigger bottles are packaged in sturdy wooden boxes and are also supplied with a gift tag. If you are ordering a big bottle as a gift and would like it delivered directly to the recipient, please fill in the information below before adding to basket and we will personally hand write the gift tag for you. You will be given the opportunity to add a separate delivery address at the checkout stage. You can make multiple gift purchases in one order by following this procedure for each product purchase.

If you would prefer the product to be sent to your own address, just click the 'Add to Basket' button. We will then include a blank gift tag for you to fill in personally along with your presentation bottle.

Please note: If you would like to order multiple big bottles without presentation tubes, or wooden boxes, please email us with your requirements and we can provide a quotation for delivery of commercially wrapped wines. 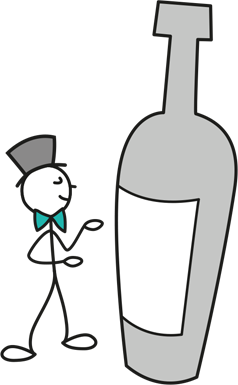